If you want your package to have significant traction in the R community, you need to submit it to CRAN. Submitting to CRAN is a lot more work than just providing a version on github, but the vast majority of R users do not install packages from github, because CRAN provides discoverability, ease of installation and a stamp of authenticity. The CRAN submission process can be frustrating, but it’s worthwhile, and this chapter will make it as painless as possible.

To get your package ready to release, follow these steps:

If you’ve been following the advice in versioning, the version number of your in-development package will have four components, major.minor.patch.dev, where dev is at least 9000. The number 9000 is arbitrary, but provides a strong visual signal there’s something different about this version number. Released packages don’t have a dev component, so now you need to drop that and pick a version number based on the changes you’ve made. For example, if the current version is 0.8.1.9000 will the next CRAN version be 0.8.2, 0.9.0 or 1.0.0? Use this advice to decide:

The big difference between major and minor versions is whether or not the code is backward compatible. This difference is a bit academic in the R community because the way most people update packages is by running update.packages(), which always updates to the latest version of the package, even if the major version has changed, potentially breaking code. While more R users are becoming familiar with tools like packrat, which capture package versions on a per-project basis, you do need to be a little cautious when making big backward incompatible changes, regardless of what you do with the version number.

There are good reasons to make backward incompatible changes - if you made a design mistake that makes your package harder to use it’s better to fix it sooner rather than later. If you do need to make a backward incompatible change, it’s best to do it gradually. Provide interim version(s) between where are you now and where you’d like to be, and provide advice about what’s going to change. Depending on what you’re changing, use one of the following techniques to let your users know what’s happening:

To manually submit your package to CRAN, you create a package bundle (with devtools::build()) then upload it to https://cran.r-project.org/submit.html, along with some comments which describe the process you followed. This section shows you how to make submission as easy as possible by providing a standard structure for those comments. Later, in submission, you’ll see how to actually submit the package with devtools::release().

When submitting to CRAN, remember that CRAN is staffed by volunteers, all of whom have other full-time jobs. A typical week has over 100 submissions and only three volunteers to process them all. The less work you make for them the more likely you are to have a pleasant submission experience.

I recommend that you store your submission comments in a file called cran-comments.md. cran-comments.md should be checked into git (so you can track it over time), and listed in .Rbuildignore (so it’s not included in the package). As the extension suggests, I recommend using Markdown because it gives a standard way of laying out plain text. However, because the contents will never be rendered to another format, you don’t need to worry about sticking to it too closely. Here are the cran-comments.md from a recent version of httr:

This layout is designed to be easy to skim, and easy to match up to the R CMD check results seen by CRAN maintainers. It includes three sections:

These are described in more detail below.

It’s painful to manage multiple R versions, especially since you’ll need to reinstall all your packages. Instead, you can run R CMD check on CRAN’s servers with the devtools::check_win_*() family of functions. They build your package and submit it to the CRAN win-builder. 10-20 minutes after submission, you’ll receive an e-mail telling you the check results.

CRAN runs on multiple platforms: Windows, Mac OS X, Linux and Solaris. You don’t need to run R CMD check on every one of these platforms, but it’s a really good idea to do it on at least two. This increases your chances of spotting code that relies on the idiosyncrasies of specific platform. If you’re on Linux or Mac, use the devtools::check_win_*() functions to check on Windows. If you’re on Windows, use Travis, as described in continuous integration with Travis, to run checks on Linux.

You’ve already learned how to use R CMD check and why it’s important in automated checking. Compared to running R CMD check locally, there are a few important differences when running it for a CRAN submission:

Finally, if you’re releasing a new version of an existing package, it’s your responsibility to check that downstream dependencies (i.e. all packages that list your package in the Depends, Imports, Suggests or LinkingTo fields) continue to work. To help you do this, devtools provides devtools::revdep_check(). This:

Run use_revdep() to set up your package with a useful template.

If any packages fail R CMD check, you should give package authors at least two weeks to fix the problem before you submit your package to CRAN (you can easily get all maintainer e-mail addresses with revdep_maintainers()). After the two weeks is up, re-run the checks, and list any remaining failures in cran-comments.md. Each package should be accompanied by a brief explanation that either tells CRAN that it’s a false positive in R CMD check (e.g. you couldn’t install a dependency locally) or that it’s a legitimate change in the API (which the maintainer hasn’t fixed yet).

Inform CRAN of your release process: “I advised all downstream package maintainers of these problems two weeks ago”. Here’s an example from a recent release of dplyr:

As well as the automated checks provided by R CMD check, there are a number of CRAN policies that must be checked manually. The CRAN maintainers will typically look at this very closely on a package’s first submission.

I’ve summarised the most common problems below:

You now have a package that’s ready to submit to CRAN. But before you do, there are two important files that you should update: README.md which describes what the package does, and NEWS.md which describes what’s changed since the previous version. I recommend using Markdown for these files, because it’s useful for them to be readable as both plain text (e.g. in emails) and HTML (e.g. on GitHub, in blog posts). The basic writing and formatting syntax is available at https://help.github.com/articles/basic-writing-and-formatting-syntax/.

The goal of the README.md is to answer the following questions about your package:

On GitHub, the README.md will be rendered as HTML and displayed on the repository home page.

I normally structure my README as follows:

If you include an example in your README (a good idea!) you may want to generate it with R Markdown. The easiest way to get started is to use usethis::use_readme_rmd(). This creates a template README.Rmd and adds it to .Rbuildignore. The template looks like:

You’ll need to remember to re-knit README.Rmd each time you modify it. If you use git, use_readme_rmd() automatically adds the following “pre-commit” hook:

This prevents git commit from succeeding unless README.md is more recent than README.Rmd. If you get a false positive, you can ignore the check with git commit --no-verify. Note that git commit hooks are not stored in the repository, so every time you clone the repo, you’ll need to run usethis::use_readme_rmd() to set it up again.

The README.md is aimed at new users. The NEWS.md is aimed at existing users: it should list all the API changes in each release. There are a number of formats you can use for package news, but I recommend NEWS.md. It’s well supported by GitHub, permitted by CRAN, and is easy to re-purpose for other formats.

Organise your NEWS.md as follows:

The main challenge with NEWS.md is getting into the habit of noting a change as you make a change.

You’re now ready to submit your package to CRAN. The easiest way to do this is to run devtools::release(). This:

Within the next few minutes, you’ll receive an email notifying you of the submission and asking you to approve it (this confirms that the maintainer address is correct). Next the CRAN maintainers will run their checks and get back to you with the results. This normally takes around 24 hours, but occasionally can take up to 5 days.

If your package does not pass R CMD check or is in violation of CRAN policies, a CRAN maintainer will e-mail you and describe the problem(s). Failures are frustrating, and the feedback may be curt and may feel downright insulting. Arguing with CRAN maintainers will likely waste both your time and theirs. Instead:

Unless you feel extremely strongly that discussion is merited, don’t respond to the e-mail. Instead:

After the package has been accepted by CRAN it will be built for each platform. It’s possible this may uncover further errors. Wait 48 hours until all the checks for all packages have been run, then go to the check results page for your package: 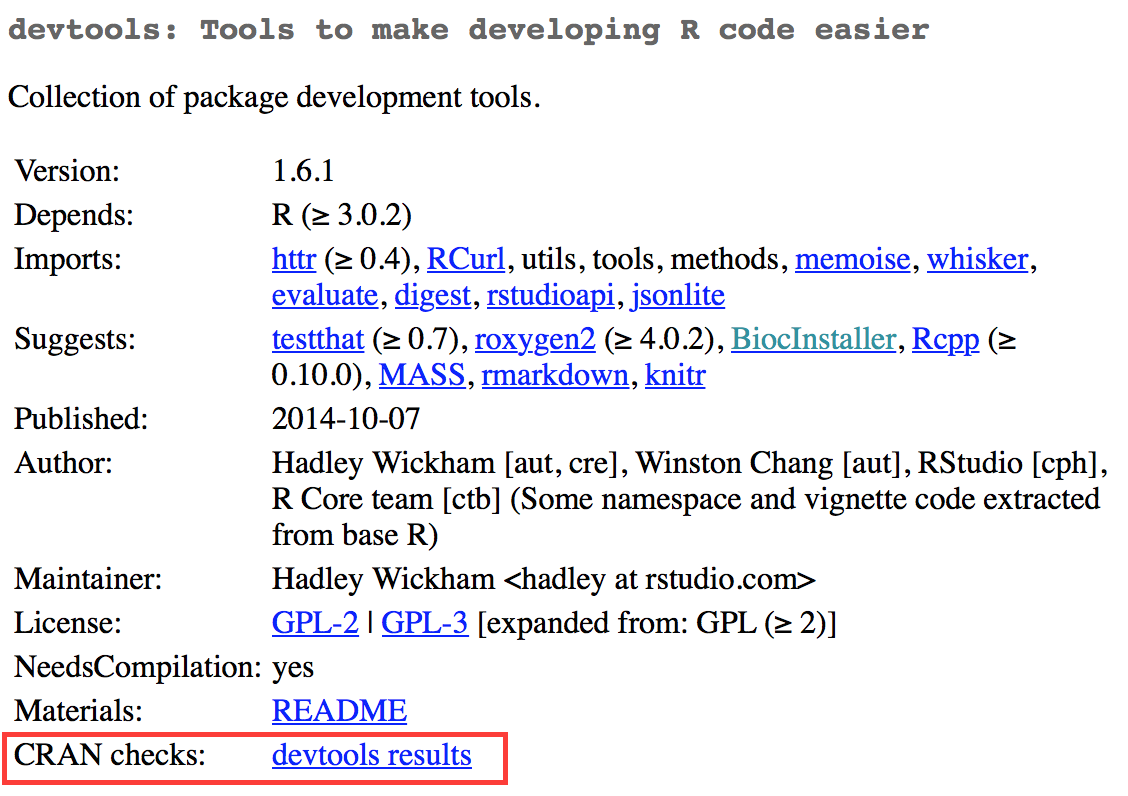 Prepare a patch release that fixes the problems and submit using the same process as above.

20.7 Prepare for next version

Once your package has been accepted by CRAN, you have a couple of technical tasks to do:

Now you’re ready for the fun part: publicising your package. This is really important. No one will use your helpful new package if they don’t know that it exists.

Start by writing a release announcement. This should be an R Markdown document that briefly describes what the package does (so people who haven’t used it before can understand why they should care), and what’s new in this version. Start with the contents of NEWS.md, but you’ll need to modify it. The goal of NEWS.md is to be comprehensive; the goal of the release announcement is to highlight the most important changes. Include a link at the end of the announcement to the full release notes so people can see all the changes. Where possible, I recommend showing examples of new features: it’s much easier to understand the benefit of a new feature if you can see it in action.

There are a number of places you can include the announcement:

You have released your first package to CRAN and made it to the end of the book!