The job of the DESCRIPTION file is to store important metadata about your package. When you first start writing packages, you’ll mostly use these metadata to record what packages are needed to run your package. However, as time goes by and you start sharing your package with others, the metadata file becomes increasingly important because it specifies who can use it (the license) and whom to contact (you!) if there are any problems.

Every package must have a DESCRIPTION. In fact, it’s the defining feature of a package (RStudio and devtools consider any directory containing DESCRIPTION to be a package). To get you started, usethis::create_package("mypackage") automatically adds a bare-bones description file. This will allow you to start writing the package without having to worry about the metadata until you need to. The minimal description will vary a bit depending on your settings, but should look something like this:

DESCRIPTION uses a simple file format called DCF, the Debian control format. You can see most of the structure in the simple example below. Each line consists of a field name and a value, separated by a colon. When values span multiple lines, they need to be indented:

This chapter will show you how to use the most important DESCRIPTION fields.

8.1 Dependencies: What does your package need?

Whereas, the lines below indicate that while your package can take advantage of ggvis and dplyr, they’re not required to make it work:

Both Imports and Suggests take a comma separated list of package names. I recommend putting one package on each line, and keeping them in alphabetical order. That makes it easy to skim.

Imports and Suggests differ in their strength of dependency:

When developing packages locally, you never need to use Suggests. When releasing your package, using Suggests is a courtesy to your users. It frees them from downloading rarely needed packages, and lets them get started with your package as quickly as possible.

The easiest way to add Imports and Suggests to your package is to use usethis::use_package(). This automatically puts them in the right place in your DESCRIPTION, and reminds you how to use them.

If you need a specific version of a package, specify it in parentheses after the package name:

You almost always want to specify a minimum version rather than an exact version (MASS (== 7.3.0)). Since R can’t have multiple versions of the same package loaded at the same time, specifying an exact dependency dramatically increases the chance of conflicting versions.

Versioning is most important when you release your package. Usually people don’t have exactly the same versions of packages installed that you do. If someone has an older package that doesn’t have a function your package needs, they’ll get an unhelpful error message. However, if you supply the version number, they’ll get a error message that tells them exactly what the problem is: an out of date package.

Think carefully if you declare a minimum version. In some sense, the safest thing to do is to require a version greater than or equal to the package’s current version. For public work, this is most naturally defined as the current CRAN version of a package; private or personal projects may adopt some other convention. But it’s important to appreciate the implications for people who try to install your package: if their local installation doesn’t fulfill all of your requirements around versions, installation will either fail or force upgrades of these dependencies. This is desirable if your minimum version requirements are genuine, i.e. your package would be broken otherwise. But if your stated requirements have a less solid rationale, this may be unnecessarily conservative and inconvenient.

In the absence of clear, hard requirements, you should set minimum versions (or not) based on your expected user base, the package versions they are likely to have, and a cost-benefit analysis of being too lax versus too conservative.

TODO: return here and insert concrete details closer to publication. Thing 1: mention relevant usethis function(s). Today that is use_tidy_version() but it needs some work (https://github.com/r-lib/usethis/issues/771). Thing 2: See if Kirill’s prototype of studying minimum version has matured into anything we can recommend for general use (https://github.com/r-lib/pillar/tree/c017f20476fce431ceee18cc3a637f7ed2884d3a/minver#readme)

There are three other fields that allow you to express more specialised dependencies:

You can also list things that your package needs outside of R in the SystemRequirements field. But this is just a plain text field and is not automatically checked. Think of it as a quick reference; you’ll also need to include detailed system requirements (and how to install them) in your README.

8.2 Title and description: What does your package do?

The title and description fields describe what the package does. They differ only in length:

The Title and Description for ggplot2 are:

A good title and description are important, especially if you plan to release your package to CRAN because they appear on the CRAN download page as follows: 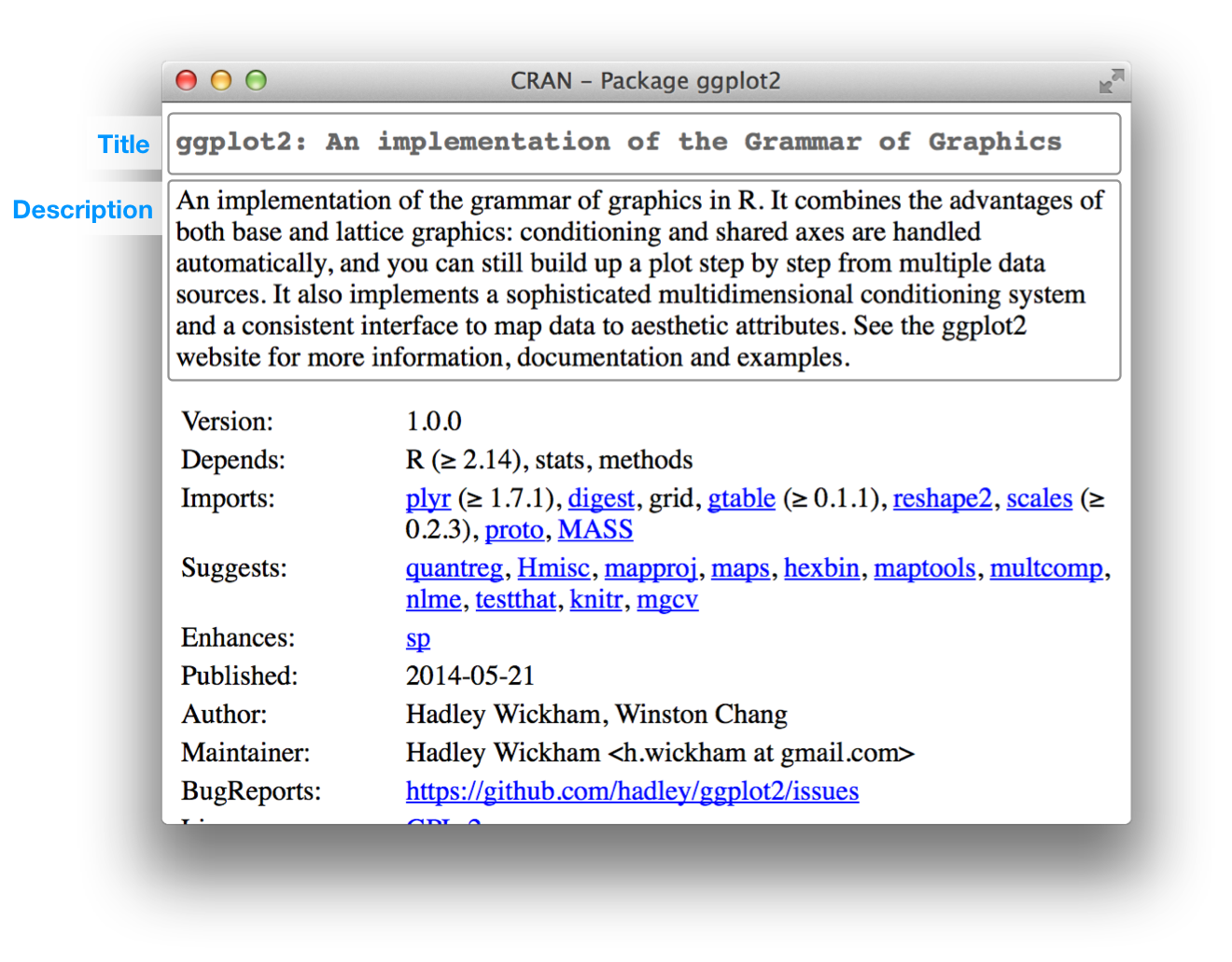 Because Description only gives you a small amount of space to describe what your package does, I also recommend including a README.md file that goes into much more depth and shows a few examples. You’ll learn about that in README.md.

To identify the package’s author, and whom to contact if something goes wrong, use the Authors@R field. This field is unusual because it contains executable R code rather than plain text. Here’s an example:

This command says that both the author (aut) and the maintainer (cre) is Hadley Wickham, and that his email address is hadley@rstudio.com. The person() function has four main arguments:

If you need to add further clarification, you can also use the comment argument and supply the desired information in plain text.

Every package must have at least one author (aut) and one maintainer (cre) (they might be the same person). The creator must have an email address. These fields are used to generate the basic citation for the package (e.g. citation("pkgname")). Only people listed as authors will be included in the auto-generated citation. There are a few extra details if you’re including code that other people have written. Since this typically occurs when you’re wrapping a C library, it’s discussed in compiled code.

As well as your email address, it’s also a good idea to list other resources available for help. You can list URLs in URL. Multiple URLs are separated with a comma. BugReports is the URL where bug reports should be submitted. For example, knitr has:

You can also use separate Maintainer and Author fields. I prefer not to use these fields because Authors@R offers richer metadata.

The most important thing to note is that your email address (i.e., the address of cre) is the address that CRAN will use to contact you about your package. So make sure you use an email address that’s likely to be around for a while. Also, because this address will be used for automated mailings, CRAN policies require that this be for a single person (not a mailing list) and that it does not require any confirmation or use any filtering.

8.4 License: Who can use your package?

The License field can be either a standard abbreviation for an open source license, like GPL-2 or BSD, or a pointer to a file containing more information, file LICENSE. The license is really only important if you’re planning on releasing your package. If you don’t, you can ignore this section. If you want to make it clear that your package is not open source, use License: file LICENSE and then create a file called LICENSE, containing for example:

Open source software licensing is a rich and complex field. Fortunately, in my opinion, there are only three licenses that you should consider for your R package:

If you’d like to learn more about other common licenses, Github’s choosealicense.com is a good place to start. Another good resource is https://tldrlegal.com/, which explains the most important parts of each license. If you use a license other than the three I suggest, make sure you consult the “Writing R Extensions” section on licensing.

If your package includes code that you didn’t write, you need to make sure you’re in compliance with its license. Since this occurs most commonly when you’re including C source code, it’s discussed in more detail in compiled code.

If you want to release your package to CRAN, you must pick a standard license. Otherwise it’s difficult for CRAN to determine whether or not it’s legal to distribute your package! You can find a complete list of licenses that CRAN considers valid at https://svn.r-project.org/R/trunk/share/licenses/license.db.

Formally, an R package version is a sequence of at least two integers separated by either . or -. For example, 1.0 and 0.9.1-10 are valid versions, but 1 or 1.0-devel are not. You can parse a version number with numeric_version.

The version number of your package increases with subsequent releases of a package, but it’s more than just an incrementing counter – the way the number changes with each release can convey information about what kind of changes are in the package.

I don’t recommend taking full advantage of R’s flexibility. Instead always use . to separate version numbers.

This advice here is inspired in part by Semantic Versioning and by the X.Org versioning schemes. Read them if you’d like to understand more about the standards of versioning used by many open source projects.

A number of other fields are described elsewhere in the book:

There are actually many other rarely, if ever, used fields. A complete list can be found in the “The DESCRIPTION file” section of the R extensions manual. You can also create your own fields to add additional metadata. The only restrictions are that you shouldn’t use existing names and that, if you plan to submit to CRAN, the names you use should be valid English words (so a spell-checking NOTE won’t be generated).